As everyone knows, technological development is evolving flash like. At the same time software requirements, approaches and algorithms are growing with equal speed.  In particular, relatively recently, developers have faced the problem of huge data volume processing – making it necessary to create a new, effective approach, a new paradigm of data storage. The solution was not long in coming – in 2011 huge companies all over the world started using the Big Data concept. In this article we will talk about this engaging approach.

What is Big Data?

Yes, first of all, Big Data is voluminous data sets that can’t be processed in traditional and ordinary ways, but that’s only about the data amount. The Big Data concept includes in itself a set of effective approaches, instruments and methods which are used for processing all kinds of huge data volumes in order to convert them into human-friendly results or statistics. The examples of data kinds that need to be processed by effective Big Data methods are:

The story in a nutshell: Big Data is not only about information. It has applications in very different projects. After an introductory glimpse, we can go deeper and talk more about methods of processing data.

To characterize Big Data, scientists emphasize its 3 main principles. They are the following:

To understand these principles in practice, let’s take a look at the technology needed to implement them.

MapReduce is the most popular method used for processing and generating Big Data sets with a parallel, distributed algorithm on a single cluster. MapReduce was introduced by Google in the year 2004. This concept was implemented in such big projects as MongoDB, and MySpace Qizmt (a MapReduce framework). By the way, MapReduce is based on the revolutionary DB’s NoSQL concept. Below you can see how MapReduce works. 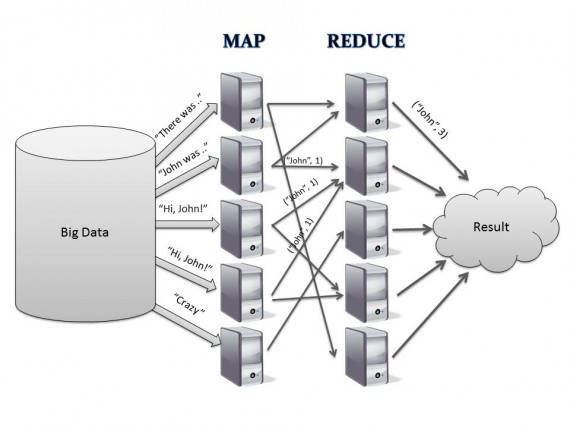 Then, its work is divided into three main stages:

map(), shuffle() and reduce() can be launched many times and work in parallel. Note, MapReduce doesn’t create indexes while processing data – as a result, it works slowly.

So, how is MapReduce practically realized? Hadoop is the answer!

At the start of the MapReduce paradigm, the concept didn’t have a realization. The problem was solved by Yahoo developers, who created Hadoop – a powerful instrument for working out the MapReduce algorithm.

The main components (core elements) of Hadoop are:

Also, 3rd party elements fill the Hadoop ecosystem. They are:

Now let’s take a look at the real-life task – “Word counter” program. It’s like a “Hello world” program in the Big Data context. The task is to count how many times every word is repeated in a huge number of documents. Our example will be written on Java. Here is the code to solve this problem:

The first step – map realization. We use the classes IntWritable and Text instead of Java’s String and int because the above-mentioned classes implement useful classes like Comparable, Writable and  WritableComparable.  Via the method map() we process all lines in the documents and create key-pair values by StringTokenizer.

If the two input sets are Hello world and Hello Hadoop, the result will be something like:

The second step – processing groups. Here we sum up all values, which are the occurrence counts for each key.

And below is the main method, where we unite the above-mentioned functionality:

Here we create a new task and define the parameters (name, mapper, reducer and paths to HDFS for results). How does it work?

For example, the algorithm processed the first line and got the map:

Then a second line:

Each map will be passed through the CombinerClass which is used for local aggregation.

The result for the first map:

And for the second:

And now is the time for the  reduce() method. As we have mentioned above, it sums up the maps’ values which are repeated for each word.

The art of the storage of Big Data

Finally, we deal with the database layer in the complicated system of Big Data. Each type of database suits specific needs. These types are:

There are a lot of articles about NoSQL and relational DB’s; it would be wise to talk more about the Hbase and Big Table concepts.

Let’s start with Big Table. It’s a high-performance data storage system, which was created to handle very large amounts of structured data. Each table has its own RowKey (primary key). Each RowKey has attributes (columns) which are organized in groups of attributes. Each attribute can store versions that have its own timestamp. Please, look at the picture below to understand the concept. 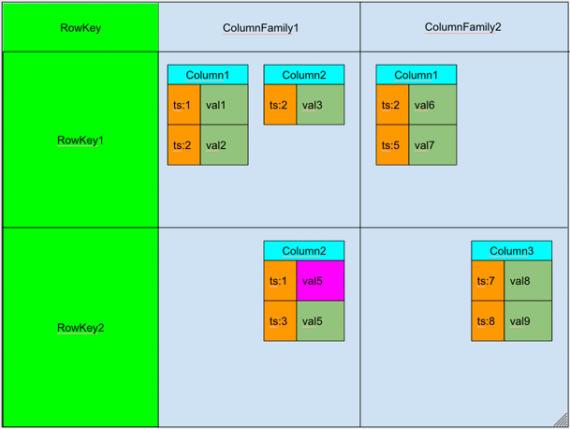 The four main operations in Big Table are similar to CRUD in relational DB’s, but Big Table also has its own unique commands:

Hbase is a very convenient DB that can work on hundreds of servers. Even if some servers break down, Hbase will work just as if nothing has happened. Such a reliable functionality is reached by a special architectural complexity which can’t be compared to the relational database architecture. If you have challenges similar to those listed below, you should immediately install the Hbase (along with Hadoop, of course):

After a determination of requirements, it would be useful to see how the Hbase exactly works. In fact, there are 2 main processes:

More about Hbase architecture you can read here

Commands in Hbase are very simple. First we create a column family:

For example, if you need to add the version, you should enter:

To get only one version:

And to get all data in the table:

nothing complex at all!  To work with Hbase DB, you can use:

As you can see, the Big Data subject is too huge to cover in one article, but we expect this article will give you a good intro concept and lead off for new ideas.